Habitat:
Although native to the islands of American Samoa, the Samoan Flying Fox can also be found in Fiji and Samoa due to modern and Polynesian introduction. They roost and forage in primary forests along ridge tops. An ideal spot is one with a clear drop off exit.

Food Habits:
The Samoan Flying Fox is a herbivore, feeding on thirty two different plant species. Their diets consist of leaves, flowers, but mainly fruit. The flying foxes are also a food source, albeit for very few animals. Their main predators are humans, to whom they are considered a delicacy. Although not common, they are also preyed upon by owls and peregrine falcons.

Behavior:
Samoan Flying Fox have been observed roosting alone and in small family groups. This species has been observed to be active in both day and night, but is chiefly diurnal. Their peak activity period is the early morning and late afternoon. They are arboreal and roost upside down by their feet from trees. These bats are also very territorial. Male bats mark their territory using aerial pursuits, vocalizations, wing displays, and scent markings via secretions of a neck gland which they rub directly on trees. 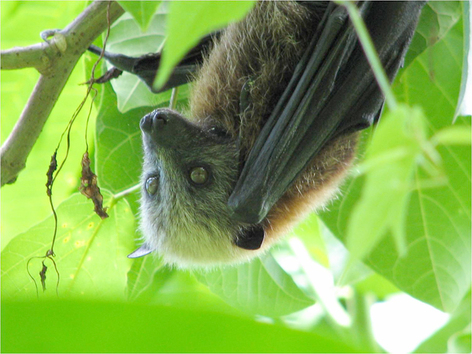 An endangered animal in this region is the Samoan flying fox, or fruit bat (Pteropus samoensis). Although native to American Samoa, it can also be found in Fiji and Samoa due to modern and Polynesian introduction. The Samoan flying fox is more commonly known as pe’a vao in the native tongue. It is a fruit bat weighing about one pound but with a wingspan of up to three feet. Although not specifically adapted for this purpose, their wings do allow them to fly. Their fur color ranges from blonde to grey on the head, neck, and shoulders with a russet brown, like that of a fox, on the body and wings. The basal ledges of their cheek teeth are considered advanced when compared to bats of the same species.They can roost in solitary or in small family groups and females usually give birth to a single young annually. They have lived up to 20 years in captivity and although there are no real statistics on their life span in the wild, it is believed to be lower due to environmental factors.

The flying fox was was put on the IUCN red list in 1988 and was classified as endangered for a few reasons. The natives often hunt the bats and although there are laws regulating this, they are rarely and loosely enforced. Islands being a prime location for hurricanes, the storms take a devastating toll on the animal population as well. Also, because of the island's ever increasing human population and the resulting need for land and agriculture, the bat’s habitat is encroached upon. The current world population of Samoan flying fox is between 300 and 900, the variability is due to large margin of error in counting.

While there is no way to control the occurrence of hurricanes and other natural catastrophes, there are ways to control hunting and the loss of habitat. There are laws regulating the hunting of these bats, even limiting it it to a bag of seven at the end of a hunting day, but the key is to enforce them. Officials are working on a stricter enforcement of these laws. Also, as the island’s human population continues to increase, conservationists are working on ways to accommodate it in an environmentally conscience way. Despite conservation efforts as well as stricter laws, the road to recovery is still a long one. 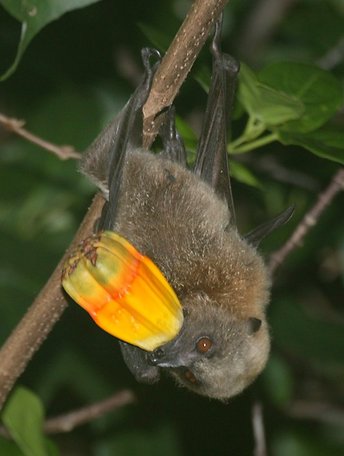 The Samoan flying fox is a herbivore, feeding on thirty two different plant species. Their diets consist of leaves, flowers, but mainly fruit. The flying foxes are also a food source, albeit for very few animals. Their main predators are humans, to whom they are considered a delicacy. Although not common, they are also preyed upon by owls and peregrine falcons.

The Samoan flying fox is very vital to its environment, it's a keystone species in many aspects. Scientists know them to be irreplaceable pollinators and play an important role in seed dispersal as well. They are one of the only three land mammals naturally found in the American Samoan archipelago, all of which are bats. These bats are also very important to American Samoans and are largely considered a gourmet delicacy. The fact that this creature is endangered proves how 'keystone' it is in light of recent events. While not coincidence but surely not the sole reason, as the population of Samoan Flying bats is on the decline, so is the abundance and diversity of the forests and other flora.