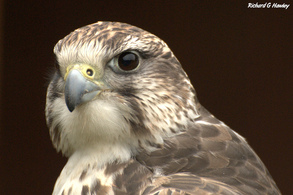 Dynamics: The Samoan Flying Fox is a type of fruit bat that is herbivorous. Although it has a large wingspan, it weighs around one pound. It relies on various forms of vegetation for nourishment and therefore doesn't have much in terms of defense such as a sharp beak, talons, or venom. Peregrine falcons are large birds of prey that can easily overpower these bats, regardless of size, with the aid of their large talons. Peregrine falcons breed all over the world and there is a small resident population in American Samoa. 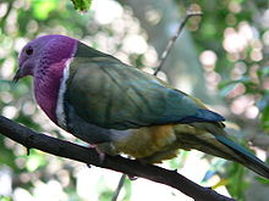 Dynamics: The Manumea is a medium sized pigeon with distinct red, blue, green, and dark coloring. It is a bird that is endemic to the region. The bird’s unique jaw and tongue structure are believed to have been specialized for feeding purposes and not, as previously believed, from any relationship to parrots. The introduction of cats to the island and the subsequent release of them by humans has created an unusual predator for the endangered Manumea. Feral cats seek hunt these birds out for food, not knowing the irreparable damage they could be causing to the ecosystem if the Manumea goes extinct.