Welcome to The National Park of American Samoa!

Where in the world is this place?

If you’ve been looking for an excuse to go down south, and I mean way south, this is it! American Samoa is a group of islands, or an archipelago, in the South Pacific Ocean and are an unincorporated territory of the United States. Located east of Australia, this is America's hidden gem! American Samoa, along with various other islands in the general vicinity, are considered to be part of an area commonly referred to as Oceania. Coral reefs, beautiful beaches, lagoons, and tropical rainforests are just a few of the beautiful sights you will encounter. The territory is composed of five main islands,Tutuila, Ta'u, Ofu, Olosega, Aunu'u, Nu'utele, the largest of which is Tutuila, and two coral atolls, Swain's island and Rose Island. Although the islands were formed via vulcanism, the volcanoes have not been active since 1911. The National Park encompasses Tutuila, Ta'u, and Ofu.

The National Park of American Samoa was established on October 31, 1988. It was first occupied by the United States in the year 1900 and the islands now have a population of around 65,000, the capitol of which is Pago Pago. About 92% of the population is made up of the native Pacific Islanders, the Polynesians.

INTERESTING FACT: American Samoa has the highest obesity rate in the world, around 74%. But do not be fooled, it is not the modern epidemic it is many other parts of the world, but an ancient cultural symbol. In the Samoan culture, being paunchy is a symbol of great wealth and is something to be very proud of because it shows that one is able to provide for ones family to their fullest needs.

The Lay of the Land 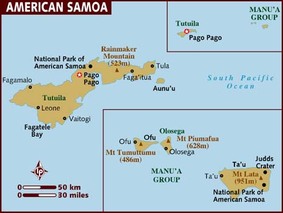 While it encompasses a couple different biomes, most of its land mass is considered a tropical rainforest biome. A biome is a large, naturally occurring community of flora and fauna occupying a major habitat. There are eight main biomes and the American Samoa archipelago also contains deserts and coral reefs, both of which are just as beautiful. This tropical rainforest is a terrestrial ecosystem consisting of no dry or short dry seasons. An ecosystem is a biological community of interacting organisms that are largely interdependent and their physical environment. This includes the relationship between the organisms. For example, this could be how a certain bird needs a tree for sustenance and nutrition and conversely how that same tree needs that same bird for pollination and spreading its seeds far and wide to keep up the species. Within this biome and ecosystem, it’s easy to see the beauty and the interconnectedness of the organisms that coexist in harmony.